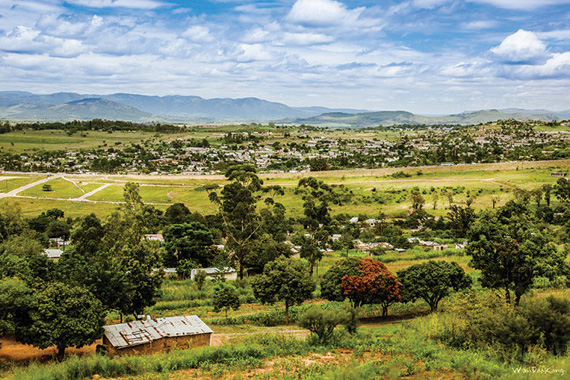 From Africa to America, delivering the Gospel all over the earth.

Starting from Swaziland, International conferences in India and Haiti have already
been confirmed. We also have obtained the permission from the Government of
Myanmar for a conference in December. Now, it is the time for us to pray and
give offerings for the mission of saving souls.

The Queen of Swaziland, Inkocikkati Rambikisa visited Yonsei Central Baptist Church
(YCBC) in September 2013. She invited  Senior Pastor Yoon to Swaziland for the
evangelization of her country.

Swaziland is in Africa, between South Africa and Mozambique.
Its area is similar to Kangwon-do in South Korea with a population of 1.2 million.
Most of the population is Christian but they are consistently following their traditional
customs, including polygamy. As people are not well-educated regarding intercourse,
the number of AIDS patients keeps increasing. 40% of the population have AIDS and
the average life span is just 32.6 years, which is the lowest in the world.

This conference (hosted by the Swaziland Christian Association) will be held at the
Mavuso Exhibition Center in Manzini in June, 2014. It includes seminars for pastors
in the morning and seminars for lay-people in the afternoon. Over 10,000 people
are expected to attend.

The conference will be broadcast around the country by the National Broadcasting
Station. The Queen has been named an honorary ambassador for the conference and
its public relations are actively in progress through TV and newspapers.
The pastors who attended the seminar in the Suwon Hindolsan Retreat Center (SHRC)
also give their testimonies on TV. (font and size)

In addition, an article, titled ‘A famous pastor in South Korea is coming to Swaziland,
’was published in a Swaziland Daily Newspaper ‘Swazy Observer,’ on 11th April, 2014.

In the article, Pastor Baseco Bishop (a local pastor) wrote, “I have no doubt that great
grace will overflow in Swaziland from the conference of Pastor Yoon.”
He also encouraged people not to miss the special conference.

A missionary, JongYang Kim (the founder of the African Continent Mission and the
Swaziland Christian College), also stated, “Please pray for many souls to be saved
through Pastor Yoon.”

Especially, Queen Rambikisa, has invited the company of Pastor Yoon to the palace
and requested a press conference. She also sent a letter to Pastor Yoon,
“The entire country, politicians and spiritual leaders in Swaziland are looking forward
to welcoming you and hope to receive great grace.”

The pastors in Swaziland are praying that many people will be healed and set free
from sickness, poverty and curses in the name of Jesus. They are also praying that
the country would be revived spiritually as well as economically through this conference.

The seminar for pastors in Bangalore, India, will be held at the King’s Palace in October.
30,000 pastors are expected to attend. The Good News Foundation Trust hosts this
conference. After selecting the site, public relations will be followed with 100-200 staff
for each region.

There will be a seminar for pastors and a great conference of Haiti at Shunmas,
in front of the Palace of the President, in October. Pastor Shaban (A presidential
candidate of the Alliance of Haiti Pastors) after watching all the miraculous power
in 2013 Haiti Conference and the work of our church, including the building of
churches in Haiti actively made a proposal and put this conference through, He will
also attend this coming 2014 Summer Conference for Pastors in the SHRC with
200 Haitian pastors. As they have experienced that only Jesus can revive Haiti,
they are looking forward to receiving the grace and blessing of God at the 2014
Summer Conference at the SHRC. (Size and font)

Other conferences including Myanmar are in preparation

The conference for pastors and for lay-people will be held in Yangon, the capital
of Myanmar, in December, 2014. Myanmar is a Buddhist country and it is only
permitted to hold Christian meetings in December, for Christmas. Now, we are
preparing a conference under the permission of the government. (size)

2,000 pastors in overseas have already registered for the 2014 Summer
Conference at SHRC. Also, many pastors who have attended the conferences
at SHRC, want to hold conferences in their countries. We are in discussion with
Hong Kong and Sri Lanka and in progress with Dominican Republic and Brazil
for 2015. (Size and font)

Pastor Yoon will have a busy schedule, including a quarter of the year with SHRC
conferences and other domestic and international conferences. This schedule is
hard for anybody. Therefore, we must pray that the absolute power of God will be
with Pastor Yoon. We also must pray for him to be strong physically and spiritually,
and that those countries and races will be changed by the Gospel and will be used
by God.

In addition, we need the mission fund for these conferences.
They will be performed successfully when ‘The Gospel Mission Fund Agreement’
is all collected in time. It will be spent preciously for saving souls.

Although we cannot attend the conferences personally, we can share our hearts,
time and finance for the success of the work of God.